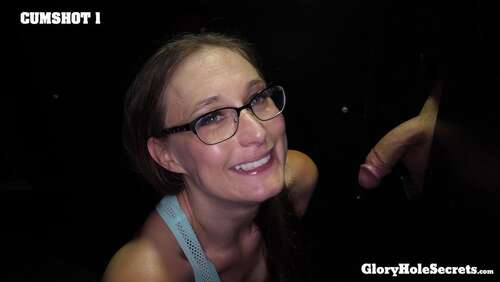 You know that sexy librarian in all those ’80s & ’90s music videos who would let down her hair and suddenly become the sexy video vixen? That’s what we have this week with newcomer Ophelia in her FIRST GLORYHOLE EVER. She may look quiet and reserved with her clothes on and her hair up, but let that bangin’ body out of its cotton prison and there is a sex goddess underneath. It comes out in her interview that she is a closet freak. 38-year-old Ophelia is a MILF who looks a decade younger than what her driver’s license reads (we checked). Sporting a pair of delightfully enhanced 32Ds (with permanently hard nipples), Ophelia really is a she-wolf in lamb’s clothing. With the exception of the five guys she banged at once the day before for our sister site, GangbangCreampie.com, Ophelia has only sucked one dick at a time in her life, pre-gloryhole. She is about to pump her stats significantly today as the throng of anonymous strangers on the other side of the wall pump her throat full of cum. She does not discriminate when it comes to putting dicks in her mouth; she loves them all. Ophelia has no cock type preference. She just wants as many as possible in her mouth as soon as possible. That moment is going to come very soon for Ophelia, just like most of her faceless men will. She rates herself an “eight” on the cock-sucking ten-scale, but you’ll have to watch her video to see if she lives up to the hype, then comment below about what you think. Should Ophelia come back to suck more cocks again in the booth, now that she’s had a taste of the gloryhole action? That’s all up to the members to decide. Vote her back and she’ll whip her hair around to turn back into cock-sucking Wonder Woman one more time. For now, enjoy Ophelia’s first time on her knees sucking and swallowing more cum than she ever has in her life on GloryholeSecrets.com!
Archive password: 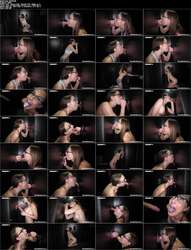